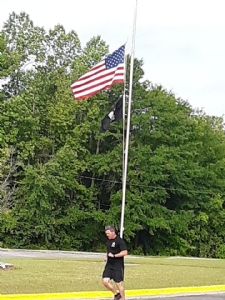 Will Strohsahl enlisted in the US Marine Corps in 1996 as a Fire Support Man. During his career he also served as an Artillery Forward Observer, Fire Support Chief, and Formal School Instructor. In 2013 he was promoted to the rank of MSgt. Some of his assignments as a MSgt include – 2nd Reconnaissance Bn. Camp Lejeune, NC, Security Force Advise and Assist Team, Camp Lejeune, NC, Fire Support Instructor, MCTOG 29 Palms, Ca. MSgt Strohsahl retired after completing 20 years of active duty service in May 2016.
Will Strohsahl currently works at Rutland High School as the Marine Instructor for the MCJROTC program and has been a member of the post since October 2019.